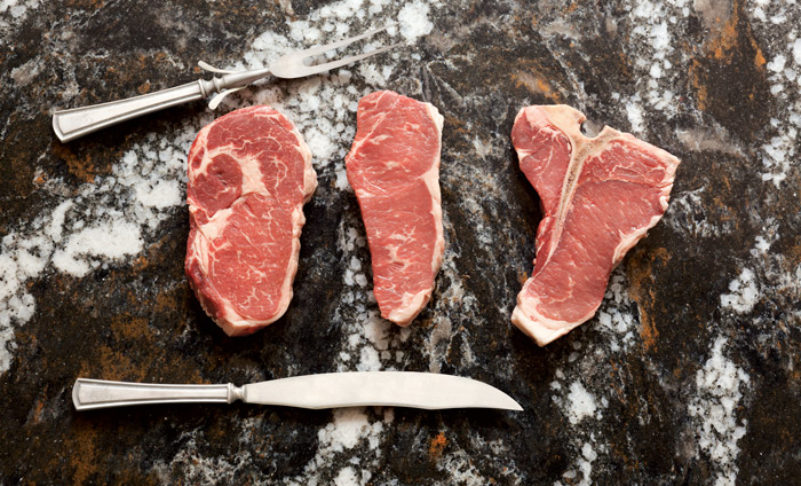 It’s May! The breeze starts blowing a little warmer on your cheeks, kids start playing out a little later on the street and you can begin to smell the delicious meals that your neighbors are cooking up in their backyards.

Generally, people start grilling as soon as they can. It marks the beginning of warmer weather, long nights spent outdoors and a new season of making memories with friends around a table of delicious food.

It’s hard to argue that a perfectly grilled steak isn’t the epitome of a good BBQ. So how does one achieve that restaurant quality taste? Here are a few easy tips to make sure that your cook-outs are the envy of your neighbors.

This to a certain extent will depend on your skill level on the grill. Generally speaking however, certain cuts offer better flavor, texture and ease of cooking but they tend to be expensive. Other less expensive cuts don’t offer the same level of marbling and therefore are more suited to marinating, smoking or slow cooking. There are three steaks in particular, listed below, that will yield the best results on a typical backyard BBQ.

The Ribeye: Cut from the center portion of the rib, the ribeye is generously marbled with fat which makes for both a rich flavor as well as an incredibly tender steak. Grill this steak for about 5-6 minutes per side and avoid burning by watching the dripping fat.

The New York Strip: The chef’s special. This steak is slightly chewier than ribeye, but still extremely tender. It has a robust flavor but not as much fat as a ribeye, so you don’t have to watch for dripping fat which is a bonus.

Sirloin: This is one of the most popular grilling steaks as many people prefer this cut’s texture over other fattier options. The sirloin is much leaner than the previous two options but doesn’t lack for flavor.

First and foremost, bring your steaks to room temperature before you grill them. This ensures that they cook evenly on the grill.

Next, make sure your grill is HOT. Like really hot. If you’re using a gas or propane barbecue, pump it up to 600 degrees. If you’re using charcoal hold your hand about 4 inches away from the grill and it should be hot enough that you want to remove your hand after about 2 seconds. That heat will get you the golden brown, slightly charred crust you’re looking for.

This is something that people definitely over think. Salt and pepper is really all you need and the secret to a perfect steak. Be liberal with the amount and rub it into the meat for maximum flavor. Grill for 4-5 mins per side, remove from the heat and tent loosely with foil for 5 mins before slicing.

And voilà! You’re a grill master extraordinare. It really is that simple. So fire up your grill, pour a round of drinks and turn up the music, spring has sprung.