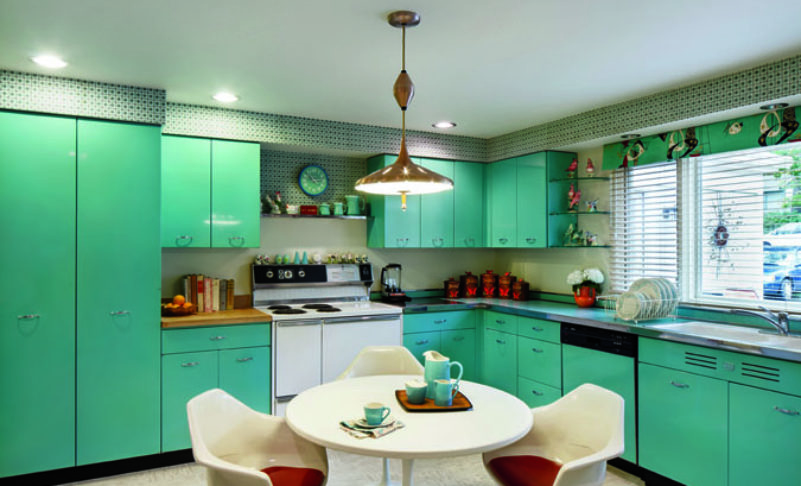 The 1950s were a time of great exuberance in the United States.

World War II had just ended, and the optimism brought about by the Allied success and the new technologies that were created during combat brought a sense of unity and progress to the nation.

New features like built-in appliances were the vogue, and the 1950s kitchen was a beautiful mix of convenience and futurism.

During this period, electricity consumption skyrocketed, largely as a result of technological advances.

Gas and coal, popular ways of heating the home in the pre-war period, were abandoned. Fridges, microwaves, stoves, and dishwashers used to be strewn about in a kitchen when they were in a home owner’s possession at all.

New homes were designed with a space for each of these appliances, to create a cohesive kitchen. This trend prevails today.

The kitchens of the 50s were all about the two Ls: linoleum and laminate. Quite inexpensive to acquire, resulting in a quickly built suburban homes soldiers.

They were appreciated because they could be made with a variety of colors and patterns. The kitchens of the 50s were incredibly bright and colorful.

Also quite easy to clean, making the life for the stereotypical 1950s housewife a little bit easier and floors gave these kitchens a touch of exuberance, a reflection of the era’s positivity.

Think of all the steel you would need to conduct a successful war and this gives you an idea of the abundance of steel there was in the post-war era, as the industry doesn’t simply die down.

High supply means lower prices. Therefore, kitchens were stocked with stunning steel appliances and cabinetry. Easy to clean, full of color, inexpensive and durable. Steel was the go-to material for many facets of the kitchen.

The small size of the houses built in this era had a significant impact on kitchen design.

Most of these houses had a single floor, and a full family could be expected to use them. As a result, the kitchen was designed for eating-in.

There were often tables in the space, if not an island the family could sit around. Additionally, these kitchens usually had an L-shaped floor plan, with a door leading outside and a space leading to the living room.

The cabinets would often feature pull out garbage bins, and lazy Susans were common on tables. All in an effort to save space and create convenience.